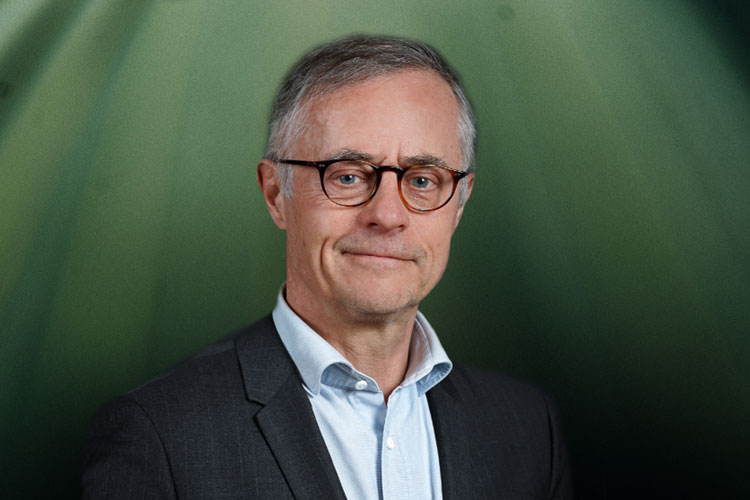 Former CEO of one of France’s largest pension funds ERAFP; prior to which he held senior positions for Elly Lilly and AXA group

You are the former CEO of one of France’s largest pension funds, ERAFP which opted for a 100% SRI policy. What was the rationale behind that?

When you are managing pension benefits, it means you are investing for the long term, so you have to be cautious about what could derail your mission: to pay pensions in perhaps thirty, forty or fifty years.

Firstly you can no longer say that what’s happening with one of your suppliers in a remote part of the world is not your problem. We had the unfortunate example of Rana Plaza collapse in Bangladesh where over 1,100 people died. If you had been invested in a retail company, and it was proven that part of your products had been produced there, then you have a huge problem, because it means that you were not monitoring.

Governance is another reason. There have been many examples of how this has gone awry with BP and VW, for instance. Lastly, environmental sustainability. If you have been investing in real estate in Florida close to the shore, for example, some of your assets may be under threat of flooding.

In your experience was that good for business, as well as being an ethical and moral decision?

Absolutely. It’s unfortunate that for too long a time people were arguing in favour impact investment just on the basis of doing good, sometimes even with the idea that you should accept some sort of trade-off on the return. We definitely think it’s the wrong way to promote the transition. We just think it’s good business. When you are managing a pension fund you are not interested in maximising the return, but maximising the sustainable return. It’s quite easy in some ways to maximise returns for one or two years, but most of the time it will be at the expense of your ability to deliver in the long run.

Sustainability is quite a simple concept, but we have lost the connection we’ve had because we are living in cities. People living in the country, people exploiting forestry, they know about sustainability: they know that if they cut ten percent of the trees a year, they will live very well for ten years, and then after there won’t be trees left.

We have to come back to common sense. Today we are living on credit on the planet, and we have been borrowing from the future for far too long. You cannot expect returns that are grossly disconnected with what sound management can deliver. We must return to the idea of not expecting more than what nature can provide.

What were the challenges you faced trying to bring in the policy whilst working for the ERAFP? Were there people against it?

It’s not that they are against it. There are two major obstacles to overcome with regard to this issue. The first is regulation, which is at odds with investing in the long term when managing long term liabilities. This is absolutely paradoxical. You have a natural producer of very long term capital like pension funds, that actually invest in assets that are much shorter in duration than their liabilities. Why? Because regulation on solvency is discouraging long-term investment. That’s the first obstacle, and we definitely need to address that at the European level.

The second obstacle is governance. Unfortunately we tend to consider volatility and risk as equivalent. If you are investing people’s money and they have a right to redeem or get their money back on demand whenever they want, this a risk. If you are managing a pension fund, meaning that people will get an annuity when they retire, obviously volatility does not have the same impact because those commitments are very long term, and once again the governance and regulators should understand that. Actually they should encourage pension funds to be long term and contrarian investors: investors that are able to go against the tide.

However, those at the board level are afraid to stray away from the benchmark: their focus is annual return. But why should we pay attention to an annual return when you are managing for the next thirty or forty years? At ERAF, we began averaging returns over three and five years in order to smooth the ‘bumps’.

In the current investment climate, pension funds are pretty desperately looking for yield and potentially heading into quite risky situations because of that. Do you believe impact investing has a role to play in mitigating that?

Yes, are in a situation where so much money has been injected into the economy, but currently you have government bonds actually paying nothing, you have to pay which is quite amazing. This has trickled down throughout the asset classes. As a result some assets are quite pricey because people are desperate for yields.

I suspect one of the next bumps will be related to liquidity.  Some people are overestimating their ability to withstand a crisis, and if they need to sell they will realise at that moment they will have to accept prices that are not the ones they were supposed to get. If you have a mismatch of liquidity you are in trouble. But some people are in in this conundrum.

Could you tell me more about the work that’s being done at the IIGCC (Institutional Investors’ Group on Climate Change)?

Basically IIGCC is a club of investors: pension funds and asset managers. They have come together in order to promote regulation that would be more favourable for investing in the transition in order to reduce carbon emissions. The current model is unsustainable and will lead to losses.

Ultimately, we need a price on carbon, be it through a market mechanism like the European market, or more efficiently, a broader carbon tax. The problem is that it needs consensus at the European level.

I think it would make sense, because many things are exchanged on the planet for very bad reasons. There is a race to the bottom in terms of social norms and competition.

Does it make sense to send wood to some remote place to reimport furniture later? The problem is as soon as you say the word ‘protection,’  you are deemed a protectionist and it’s the end of the debate. I feel it is important to have a sound counter-debate on if it makes sense to let products roam around without any check on where it was imported or exported.

I know there is the argument that by buying goods in Bangladesh you are helping them to grow, but I think that the needs that have to be answered in those countries are so big that just helping those people to get access to more products would be enough to promote internal growth rather than the growth that is mostly driven by exports.

We are considering the problem piece by piece, but it’s a broad system that has to be reset.

Are there any asset classes you see as the next big opportunities within impact investing?

Are there any particular ideas you are excited about or looking at, at the moment?

There is a fantastic energy which is the energy of youth. I believe they will not accept being excluded from the change we are discussing. We should use social media in order to have a different relationship to empowerment. Because now when we are talking about empowerment it’s still in some sort of relation to the top-down approach, them saying, “we’re going to empower you,” rather than people saying, “we want to see this change happening at the local level.” I hope those born in the late 2000s will no longer accept this top down approach. This is their future, they have to be leading the charge to speed up this transition.